How To Get An Airline Upgrade

Not such a long time ago – but in a very different world – a ‘surprise’ flight upgrade wasn’t the rare thing that it is today. In fact, if you traveled enough, it was just a matter of time before a check-in or gate agent slipped you a boarding pass with a very low row number – a golden ticket of sorts for many travelers.

Prior to the COVID-19 outbreak, everything flight-related had a price tag, airlines were asking customers to pay $99 for an ‘upgrade’ to the front section of Economy, just for the right to get off the plane more quickly.

Many factors created that ‘zero upgrade’ environment – like the airlines’ love of fees and surcharges, computerised seat assignments (which made it much easier to know where everyone was well before flight time), very full flights, and increased competition for upgrades due to the degraded state of flying Economy.

But just because your chances of getting an upgrade have gone down, you don’t necessarily have to throw your hands in the air and give up on the idea altogether. To learn how to get upgraded to a higher cabin, check out the tactics below. Before we start though, you should remember that not all upgrades are equal. 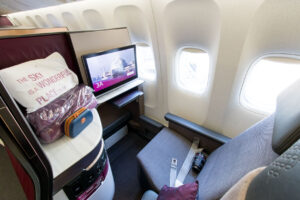 Don’t get me wrong – when I am filing past the first few rows of seats on my way to the back of the plane, those big leather seats with folks already drinking wine in them have a strong allure. But those seats come with a cost, whether in cash or in frequent flyer points, and on shorter domestic flights you don’t get all that much more than the people in Economy – wider seats, a little more legroom, and the chance to board a little earlier.

That said, some airlines have upped the ante in their premium cabins on longer domestic routes. Some Qantas flights from Brisbane, Sydney, and Melbourne to Perth offers lie-flat seats in Business Class making an upgrade on these legs something that is definitely worth trying for.

The same goes for longer international flights though in my mind the better seats far outweigh the improved food and drink offer. Most Business Class seats on flights out of and into Australia convert into beds that are not only comfortable but give you the possibility of arriving in your destination well-rested. I can’t say the same about Economy seats.

Why It’s So Hard to Get a Free Upgrade

The procedure for getting upgrades that one is entitled to have become almost 100 percent automatic and hands-off, and with all flights being full in both cabins, there isn’t much ‘wiggle room’ for people to exploit.

And it is not just a combination of luck and automation that will shut you out of upgrades – at some airlines, it may be a matter of policy. Most airlines state, in no uncertain terms, that their policies prohibit arbitrary upgrading, both at check-in and onboard. It’s a firm rule, with no room for negotiation or interpretation.

This becomes understandable when you consider that upgrading is now often done electronically, rather than by queuing up at the check-in counter.

We commonly think of just two to five main classes on airplanes, including First, Business, and Economy, plus the recent emergence of Premium Economy.

But the fact is that Economy Class can have numerous sub-classes, referred to as ‘yields’ in the industry. Each of these sub-classes carries differing eligibility (or lack thereof) for various amenities, including upgrades. The very lowest levels of Economy Class will rarely be prompted to upgrade, or even eligible to upgrade.

That said, since stories and rumours of free upgrades persist, here are some tactics to get you into that privileged group that seems to snag upgrades—or at least says they do.

If you fly a lot on the same airline, your options for getting upgrades soar. Highly ranked frequent flyers are the first eligible and first chosen for most upgrades, so despite the fact that airline experts have been bemoaning the devaluing of airline status for years, if you are a highly ranked frequent flyer, you will see greatly increased upgrade offers, often at no cost.

Using an airline aligned credit card allows you to rack up points, including sign-up bonuses, that you can apply toward upgrades. Though technically not free, you may be able to upgrade from Economy to Premium Economy or Business using points.

Dressing well is not the ticket to ride some hope it is, but even so, you are not getting an escort to the front of the plane if you are wearing cargo shorts, a tank top, and flip-flops. Most people don’t even want to sit next to you in this case, let alone upgrade you.

Online check-in is available beginning 24 hours before your flight, and the early bird has the best chance of nabbing an upgrade – though you’ll usually have to pay for it. As the minute’s pass and more travelers check-in, some of those folks will be looking and paying for upgrades, and once those seats are gone, they’re gone. 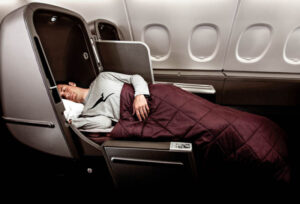 Showing up late to request an upgrade when the crew is just trying to get everyone in the air isn’t going to work. Do everyone the courtesy of making your request with plenty of time to spare before the flight, and when no one else is competing for their attention.

I’ve personally has success by simply asking “If you are upgrading passengers on this flight, I would like to be considered.” Inserting the word ‘please’ won’t hurt you either.

Being overly demanding or demeaning just inspires gate staff to pick someone else to upgrade if the opportunity arises. Don’t waste everyone’s time and goodwill if you know that you are a poor candidate. If you are traveling with your whole family or purchased a ticket for an extremely low fare, you probably don’t want to spend your energy-demanding upgrades.

Even though seats in business class may also be empty, the airlines don’t usually upgrade people for no reason. If the flight is full, your chances are better. Airlines carefully plan how much they oversell flights, and their inventory departments are not upset if people need to be upgraded to accommodate everybody on the flight. Therefore, on a full flight, the airlines are sometimes forced to upgrade people. In this scenario, if you have a good story, you may be lucky. Remember, of course, that Business or Premium Economy may already be full from pre-requested elite-level upgrades. The odds are best for those traveling solo who are sometimes re-seated upfront in business to accommodate families sitting together in economy.

Whenever airlines overbook flights and need people to give up a seat, that is when you have the most leverage for getting concessions and upgrades from the airline. Most of us have been in airports listening to increasingly urgent announcements looking for volunteers to give up their seats; in that situation, you can go up to the gate, set your conditions, and then let the airline decide if it can meet those conditions.

A few years ago I got a message from one of my brothers who was waiting at Santiago Airport in Chile to fly home. His flight had been overbooked and he wanted some tips on what to accept from the airlines if he offered up his seat. I suggested he volunteer to give up his seat for US$500 dollars and an upgrade on his replacement flight. They turned him away at first but as they became more desperate to clear space on the flight they accepted his offer. A win-win situation!