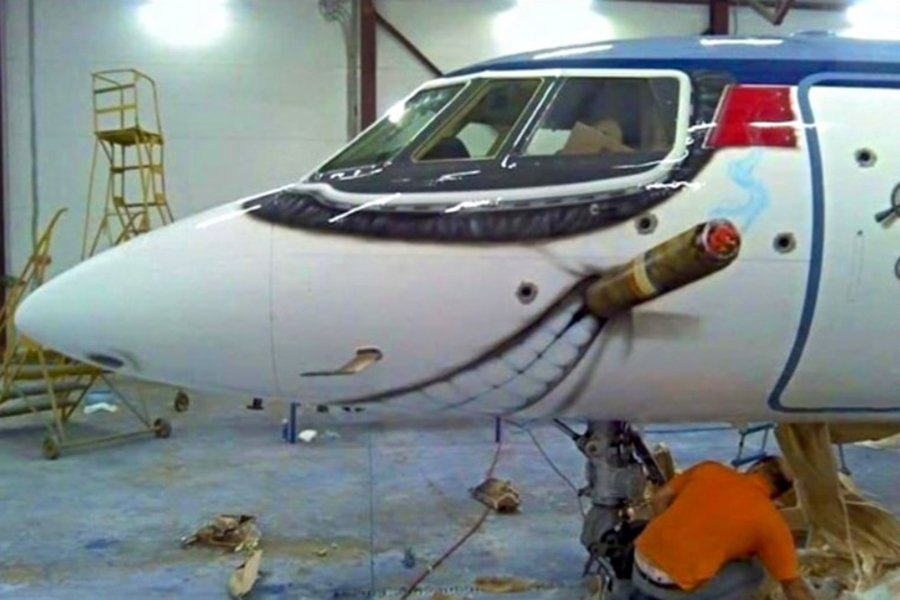 Adding Colour To The Sky

We are all accustomed to seeing the painted fin and rudder on most commercial aircraft.

Knowing which livery belongs to which airlines helps us to distinguish one carrier’s aircraft from another. It’s easy to differentiate the ‘Flying Kangaroo’ of Qantas from the ‘Silver Fern’ of Air New Zealand.

Recently, some airlines have gone beyond simply painting their logo and name on the planes and have instead opted to go with fully customised paints jobs on some aircraft.

Some of the artwork is so creative that they have not only surprised us but made us smile as well.

Below is a selection of jumbo jets painted for business purposes, private jets painted however the owner wants, and a few intimidatingly painted military aircraft as well. 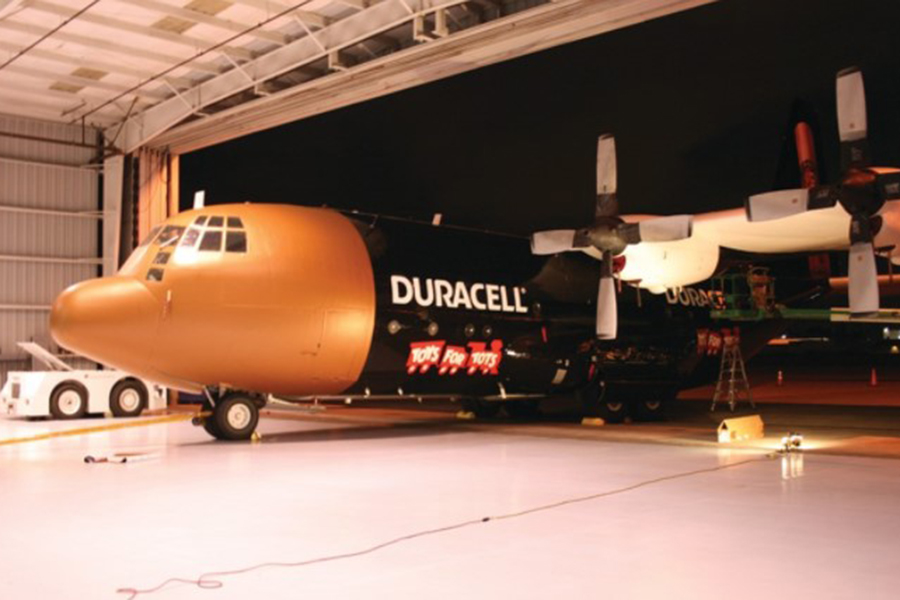 This Duracell batteries custom paint job on the front of what looks like a C-130 Hercules aircraft is a great one. We love the custom aircraft paint jobs that are so simple yet so effective – it looks just like a battery!

During the 2003 NATO Tiger Meet – a multi-national training exercise that has been going on for over 50 years – the world was introduced to this bad boy. The Mirage 2000RDI 83/12-YL from the host unit EC 1/12 that you see here was granted one of the coolest aircraft paint jobs we’ve ever seen. See how detailed it has been done, including the glint in the tiger’s eyes. 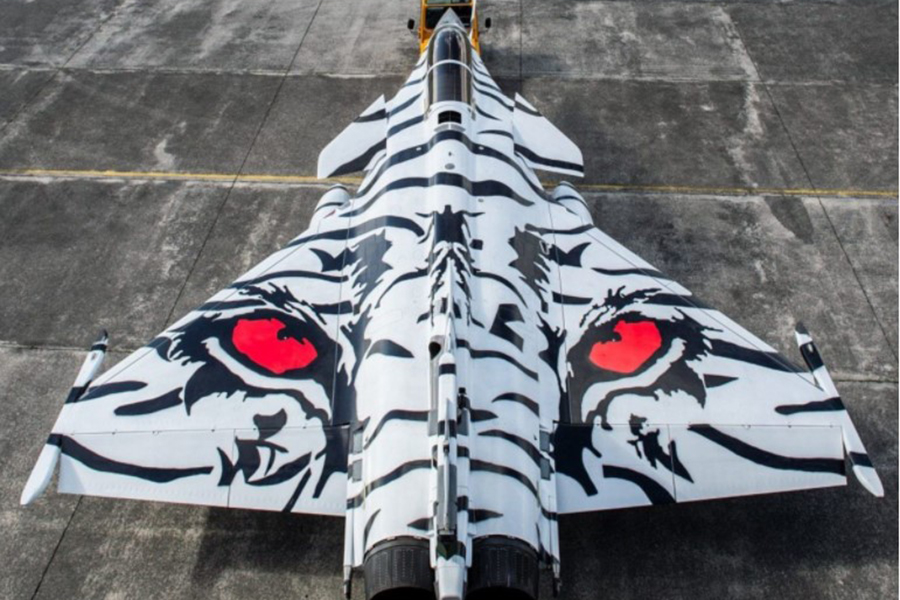 This is a French Dassault Rafale M fighter jet painted with the look of an ‘Arctic Tiger’. Compared to the last big cat-themed fighter jet, how do you like this one? The custom-painted Dassault Rafale is intimidating, that’s for sure. We love how the white and black of the entire aircraft makes the red eyes pop that much more.

Technically speaking, the Mil Mi-24 is a large artillery helicopter and attack helicopter with a low capacity for troop transport. This custom painted aircraft of the Hungarian Air Force is the most attractive, fun and intimidating helicopter we’ve ever seen. 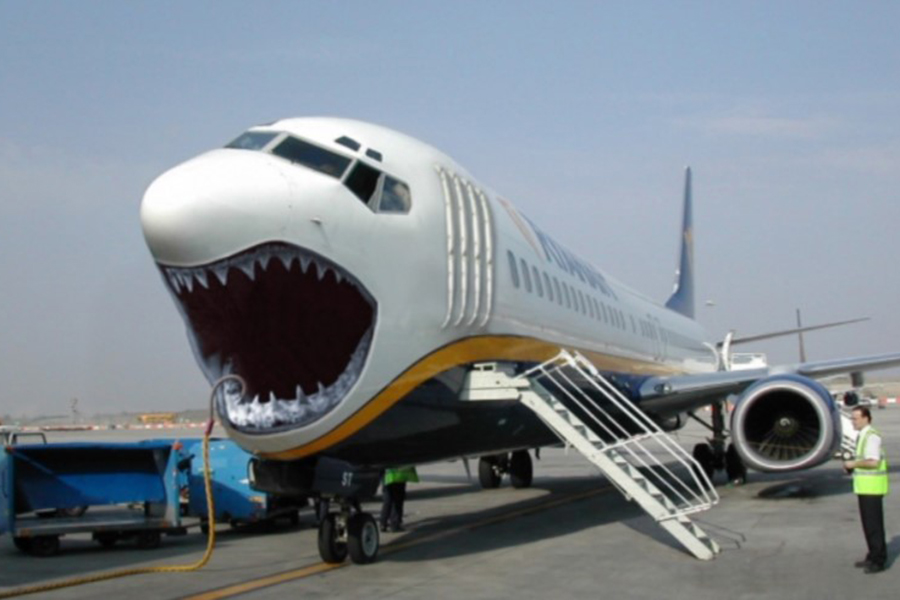 This Russian airliner is painted with one of the wildest schemes we’ve seen. Although it looks lopsided from this angle – the paint job is actually symmetrical. This one was too cool not to share. 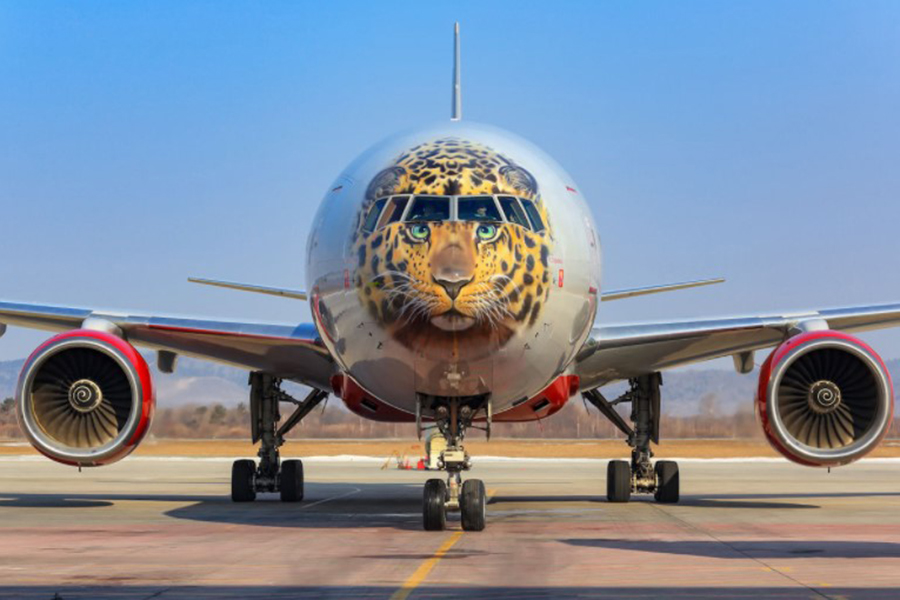 This plane is the brainchild of a collaboration between Rossi’s Airlines and Amur Tiger centre. The plane, a Boeing 737, has a stunning Amur Tiger on its nose. The painting needed about 500 kilos of paint to complete and that tells you just how huge it is. 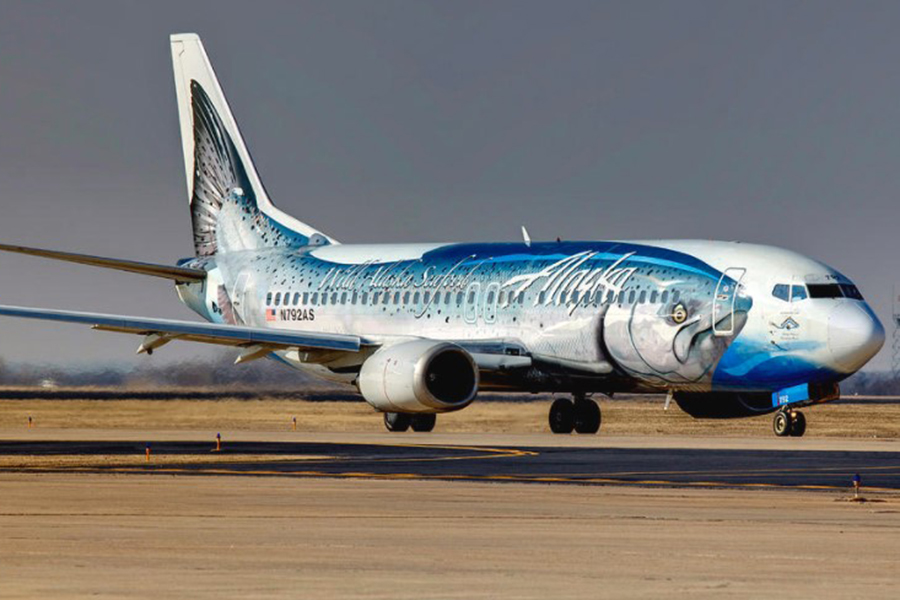 Weighing in at 91,000 lbs and stretching 129 feet long. Alaska Airlines has created the world’s largest flying salmon. The Boeing 737-800 is said to be one of the most intricately painted commercial aircraft on the planet. 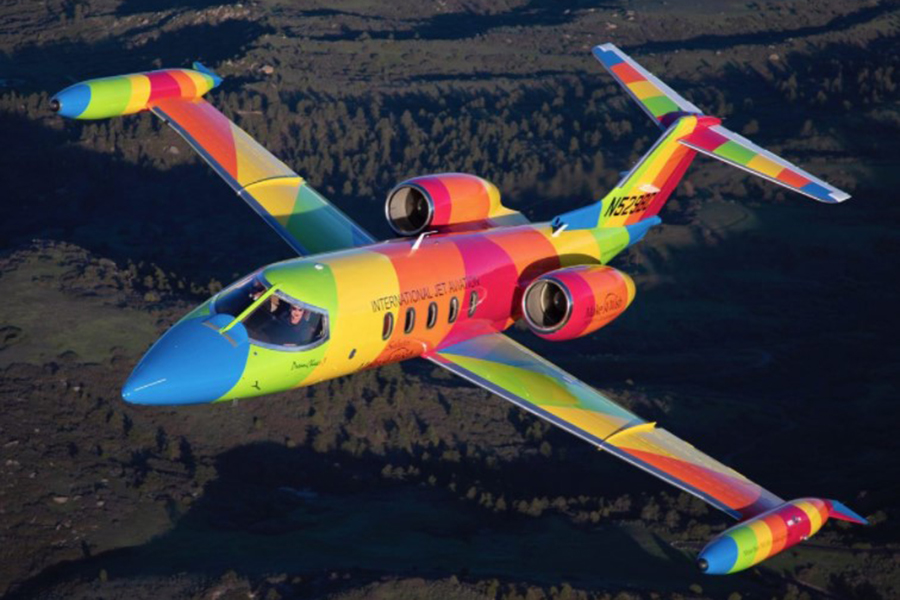 The private jet seen here is one of the most unmistakable planes to ever grace the skies. Named “Dream Chaser 5,” the Lear Jet model 35, the Lear Jet was donated by International Jet Aviation, an aircraft charter and management company to ferry seriously ill children all over the world. 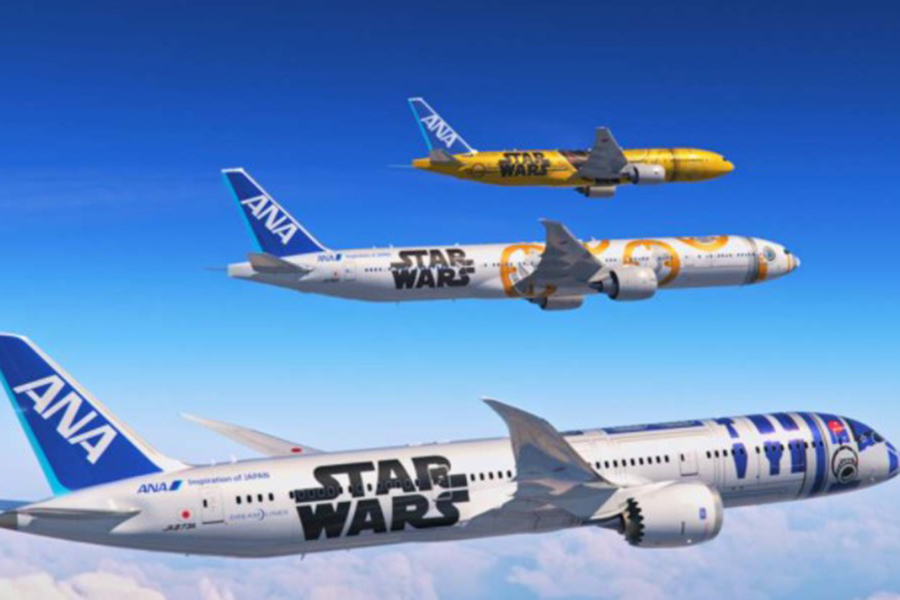 And when it comes to incredible custom paint jobs on commercial aircraft – All Nippon Airline DOES. This is just incredible, not one but three Star Wars themed airplanes. These ANA aircraft with custom painted graphics are such a cool idea, and anytime you can pepper Star Wars into your product you’re bound to increase your fanbase. 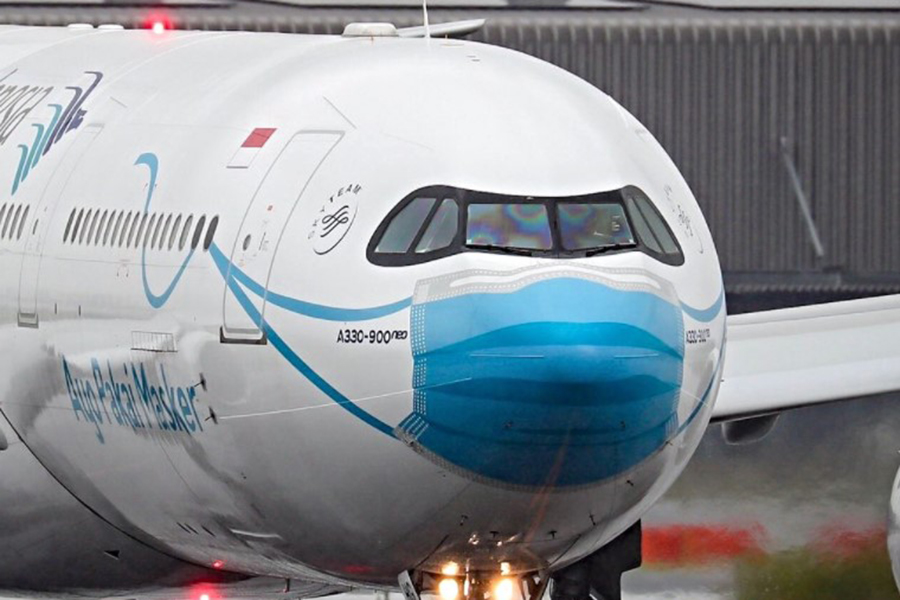 The A330-900 is a monstrous plane! With a passenger aircraft that size, this thing could probably catch covid several times over on its way across the Atlantic Ocean. The paintwork is exquisite though, look at the detail on the edges of the mask. 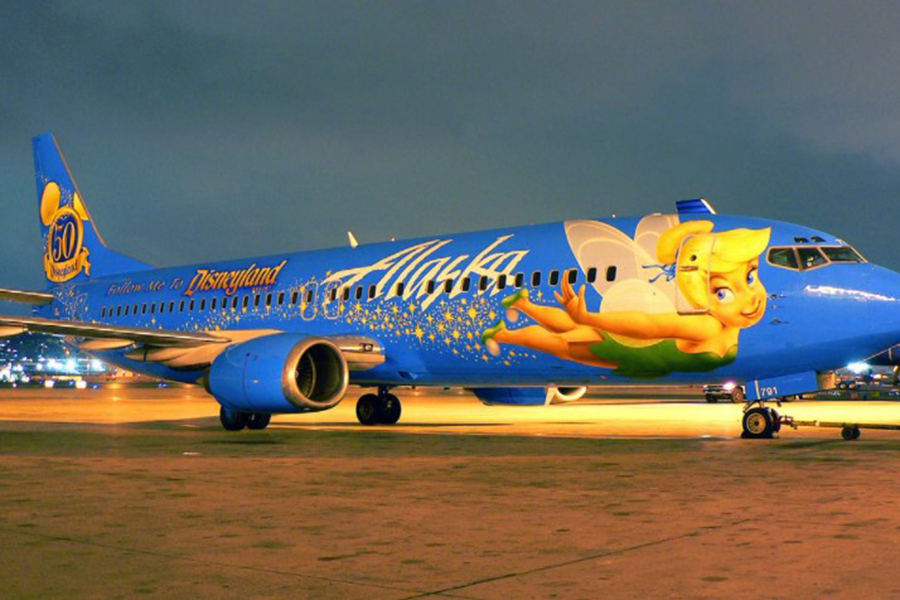 The great star of the aircraft painting on this plane is Tinkerbell from Peter Pan. But do not be deceived. This isn’t a Tinkerbell only gig. This plane had this look commissioned as a result of a partnership between Alaska Airlines and Disneyland. 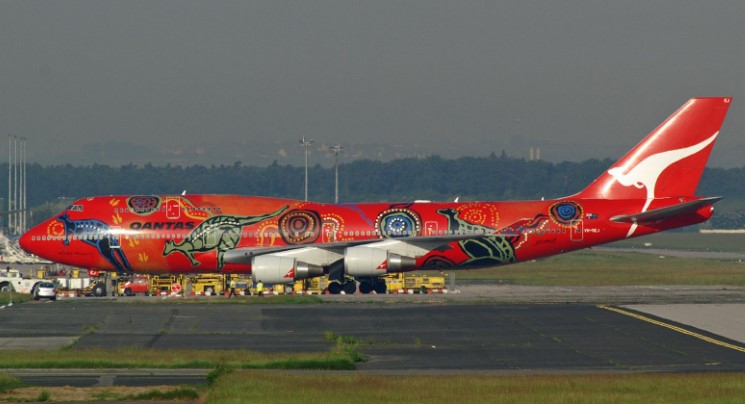 No guessing where this aircraft is from! Titles ‘Wunala Dreaming’, the artwork was inspired by the natural colours of Australia, from the bright reds of Central Australia to the purple-blues of desert mountain ranges, and the lush greens of Kakadu. Click here if you want to learn more about the Qantas Flying Art Series. 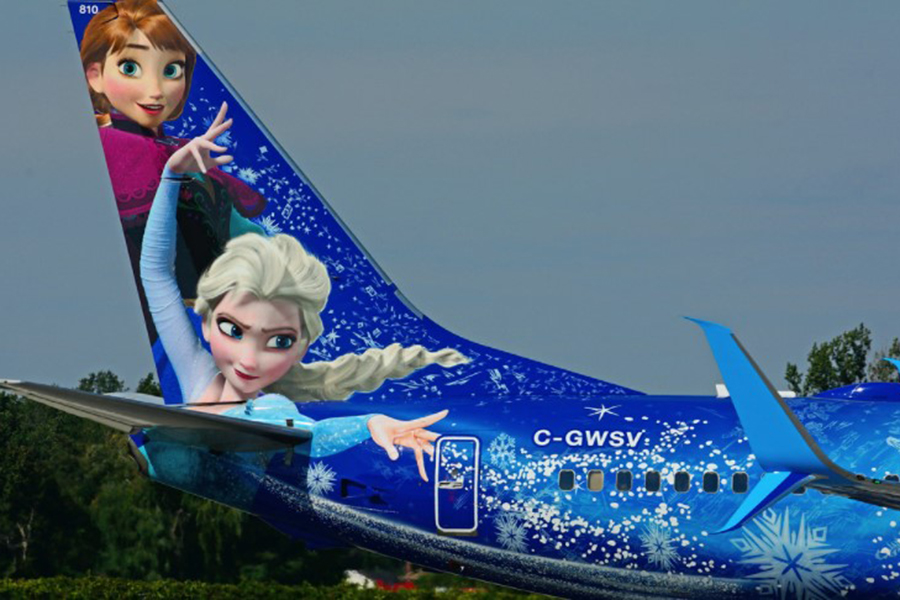 Okay, let’s tell you this. If you have plans of painting a scene from frozen on your plane, you’d need almost 800 litres of paint in over twenty-three different colours. At least we know that’s what Canadian airline WestJet needed to complete this aircrafts painting. 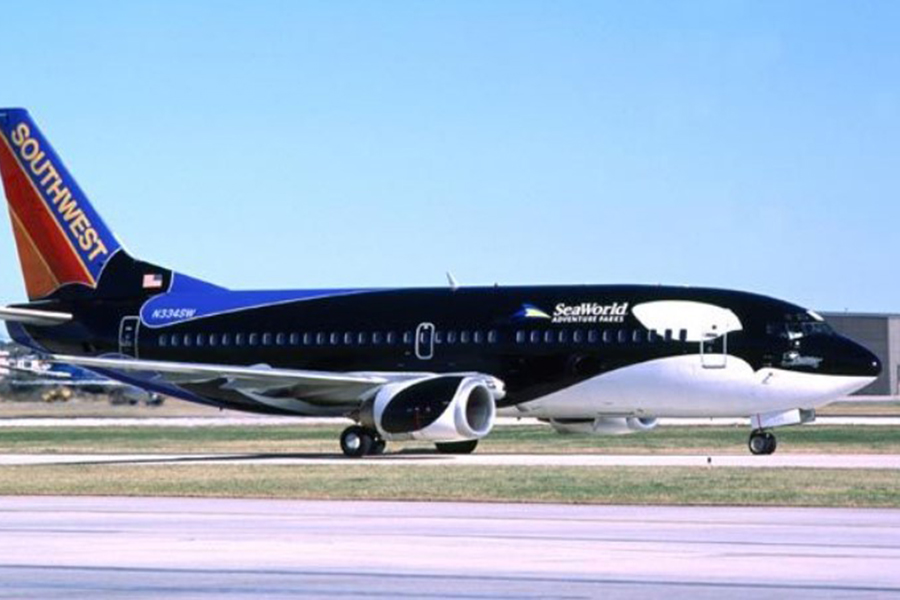 This wild orca-themed paint job is simple yet effective. No major designing to do, just a couple of colours and crucial outlines of the facial features and voila – the orca aircraft! SeaWorld transports massive whales and fish in aeroplanes like this. 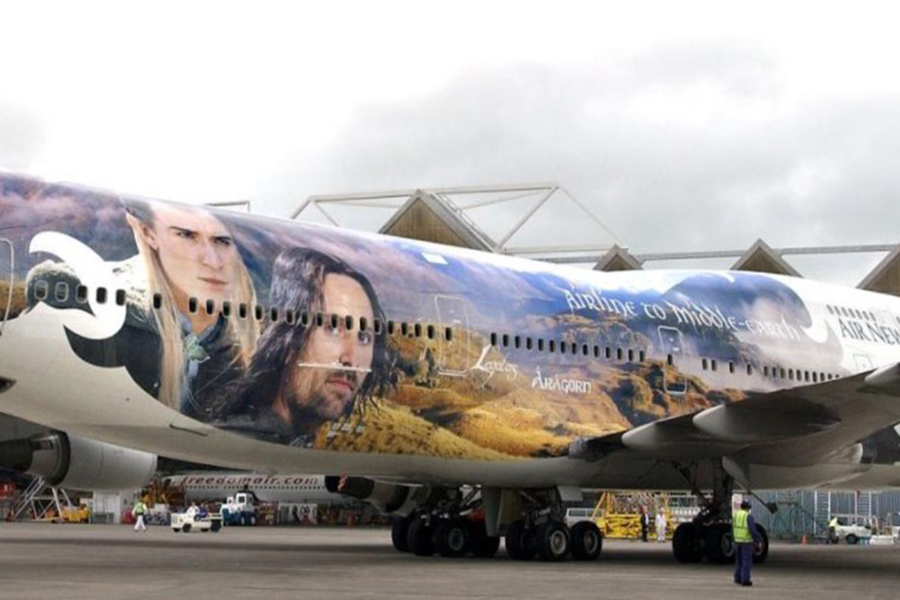 Imagine if Frodo and the gang could’ve boarded a plane to Mordor. Both Air New Zealand and Tourism New Zealand were quick to link themselves with the movies when they were released… and they even came up with the tagline ‘The actors have gone but the sets remain’ to entice overseas visitors to head to the shaky isles.

Do you have a favourite paint job that you’ve seen on an aircraft? there are lots out there and we’d love to see them.