Top 10 Most Colourful Places On The Planet

As we head into the last final weeks of a pretty crummy winter we thought it might be nice to share a little bit of colour and light to brighten your day and to get you thinking about your travels once the restrictions are lifted.

The following is a list adapted from the article from Traveller.com.au of the Worlds top 10 most colourful places by David Whitley. Gardens by the Bay in Singapore is my addition to the list.

I wonder how many of you have already visited these places and have some pictures or experiences to share or would like to nominate another destination to add to the list? 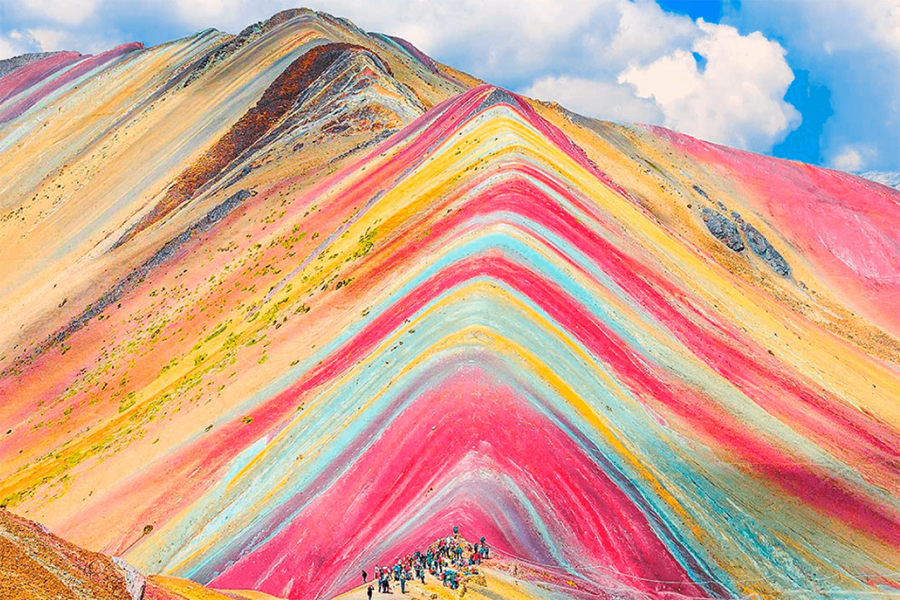 A two-hour drive, then a 5km hike from the city of Cusco, the mountain known locally as Vinicunca breaks out the multicoloured stripes. According to the local tourism office, there are a suspiciously convenient seven colours in the rock strata, hence the English language name. All come from different minerals – pink from clay, red from iron, mustard yellow from sandstone, and so forth. See www.peru.travel/en 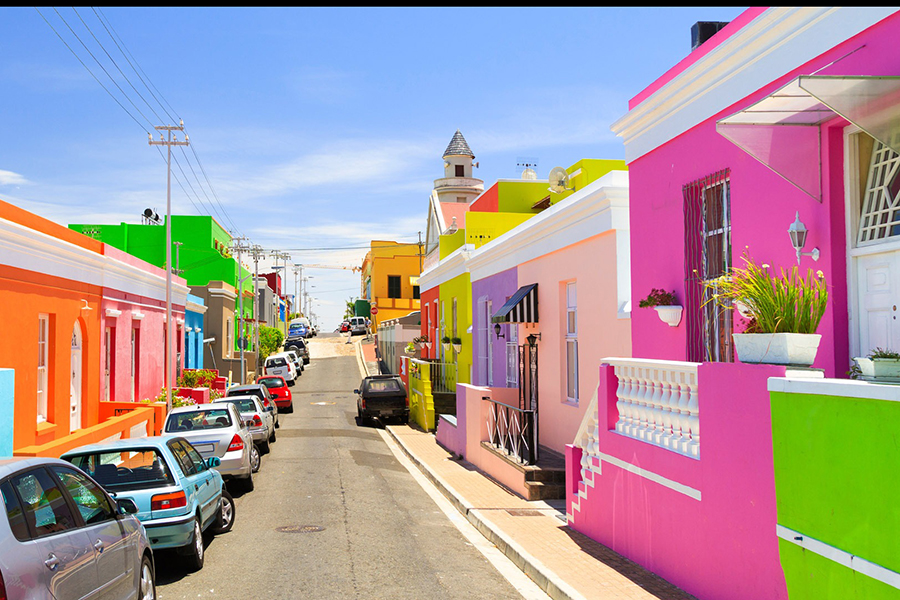 Cape Town has such a beautiful natural setting that it really doesn’t need human help, but in the historic district of Bo Kaap, it’s people who’ve provided the photo ops. Long a bastion of the Cape Malay population, the neighbourhood’s buildings are covered in pretty much every pastel colour imaginable. Well, we say “pastel” but really it’s a bit brighter than that. Big and bold wins out over subtlety. See http://capetown.travel 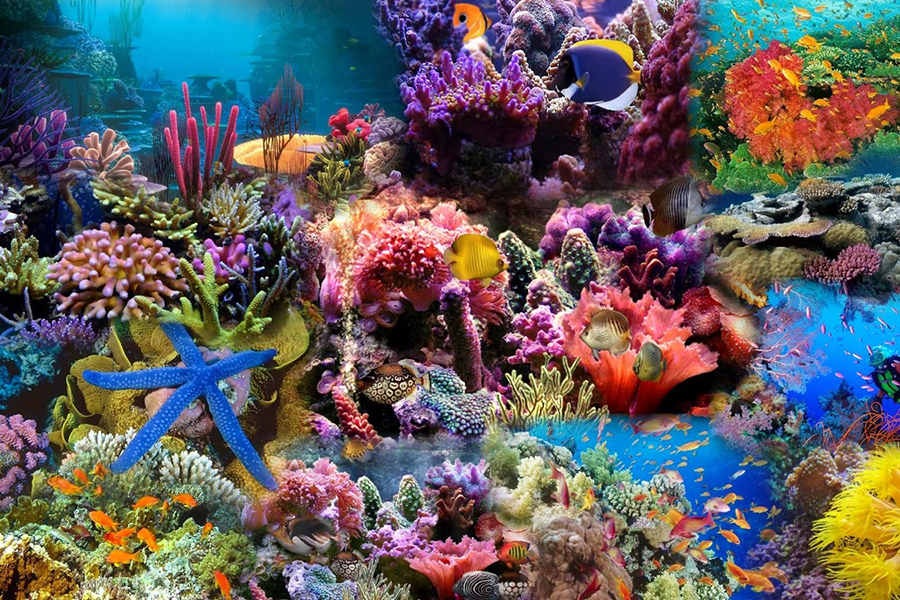 The dirty little secret about coral reefs is that most parts of them are fairly humdrum and, well, brown. But the bits that are colourful – which, understandably, are where the snorkeling tours tend to head to – are majestically so. It’s partly about the coral, of course, but the swarming, multi-coloured fish are a big part of it, too. The parrotfish, in particular, are mini-kaleidoscopes in their own right. See www.queensland.com 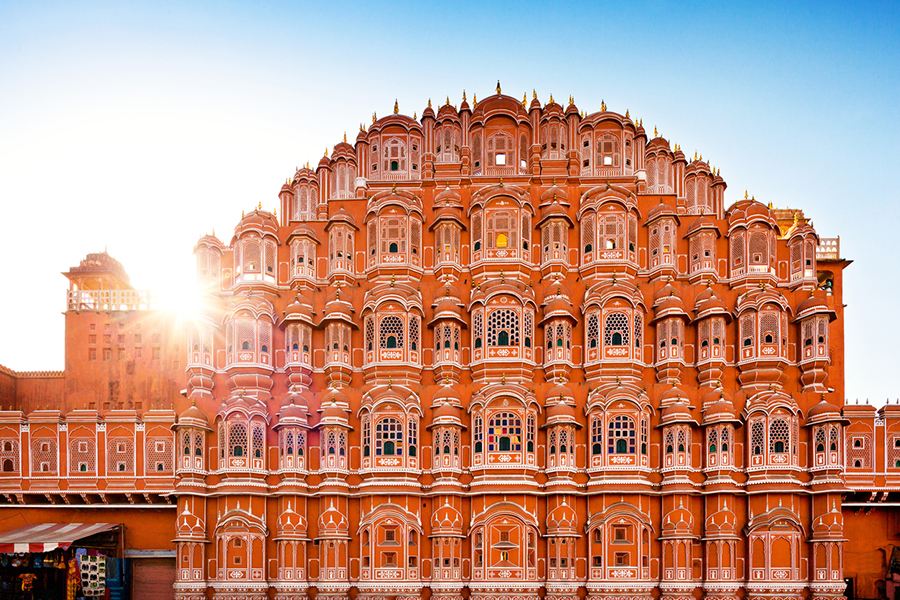 When the local maharaja decided he wanted to impress the visiting Prince Albert of Britain in 1876, he decided to give Jaipur a lick of paint. A pink terracotta colour was chosen, partly because the paint was longer-lasting in the climatic conditions, and partly because it was regarded as a welcoming colour. Since then, it has become Jaipur’s gimmick, with virtually every building painted like a six-year-old girl’s birthday party. 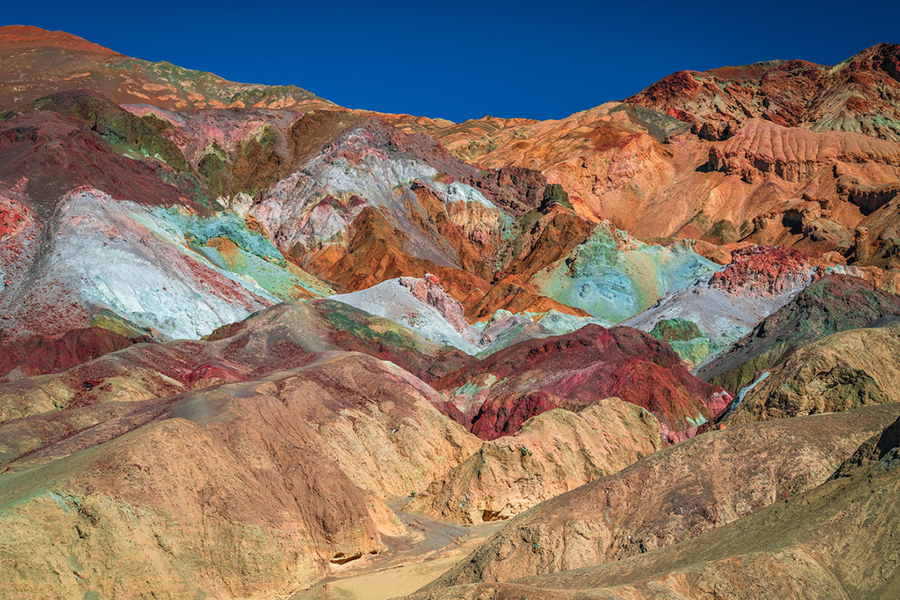 In the scorching, done dry desert of Death Valley National Park, there are some extremely weird dunes and rock formations. But for nature getting its paint set out, it’s tough to beat Artist’s Drive. This scenic road passes an area called Artist’s Palette, where a whole host of minerals in the rock turns the scene into a messy splodge of greens, blues, pinks, oranges, and whites. See www.nps.gov/deva 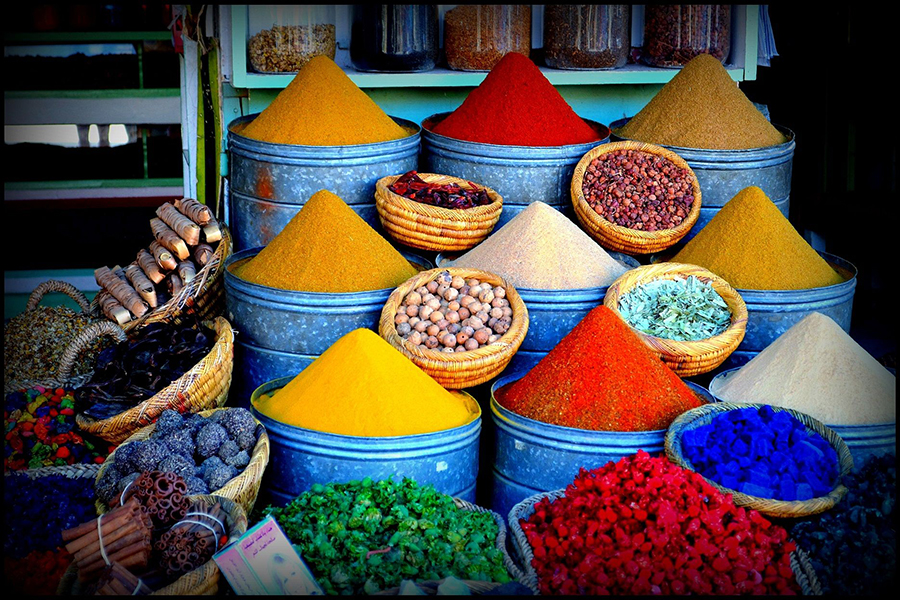 Marrakesh is known as ‘the red city’ because of the clay-rich walls surrounding the city’s chaotic, beating heart – the Medina. But there’s so much more colour once you’re inside – handily provided by the men selling fresh oranges on carts, huge bags of spices outside the souk stalls, traditional Moroccan stained glass lamps and traders selling meticulously woven carpets. See www.visitmorocco.com 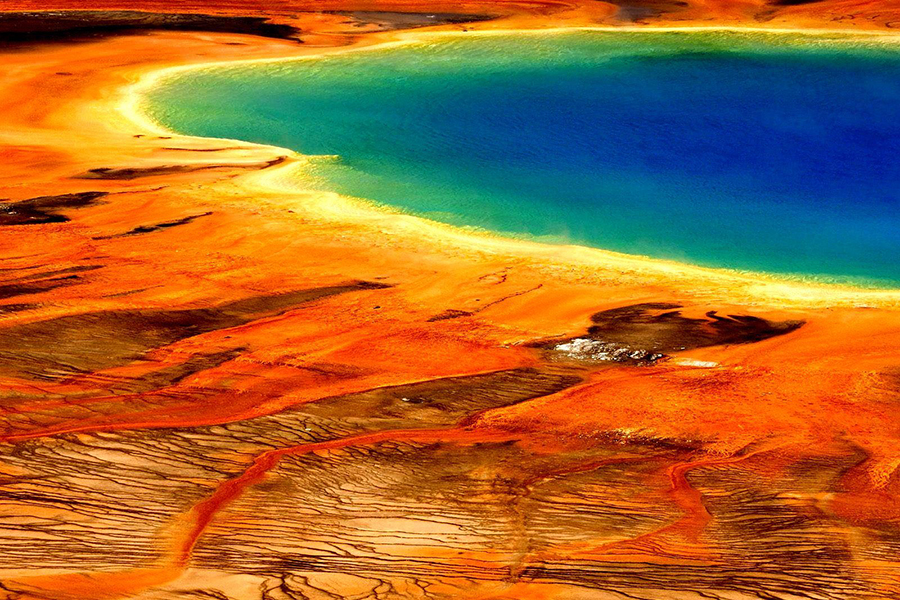 The Old Faithful Geyser and Yellowstone Falls tend to be the two big go-to attractions in Yellowstone National Park, but the Grand Prismatic Spring is arguably more entrancing. The third-largest hot spring in the world has a deep blue centre, but it gets all psychedelic around the edges due to what is known as microbial mats. These colours change too – it tends to be more red and orange in summer and goes dark green in winter. See www.nps.gov/yell 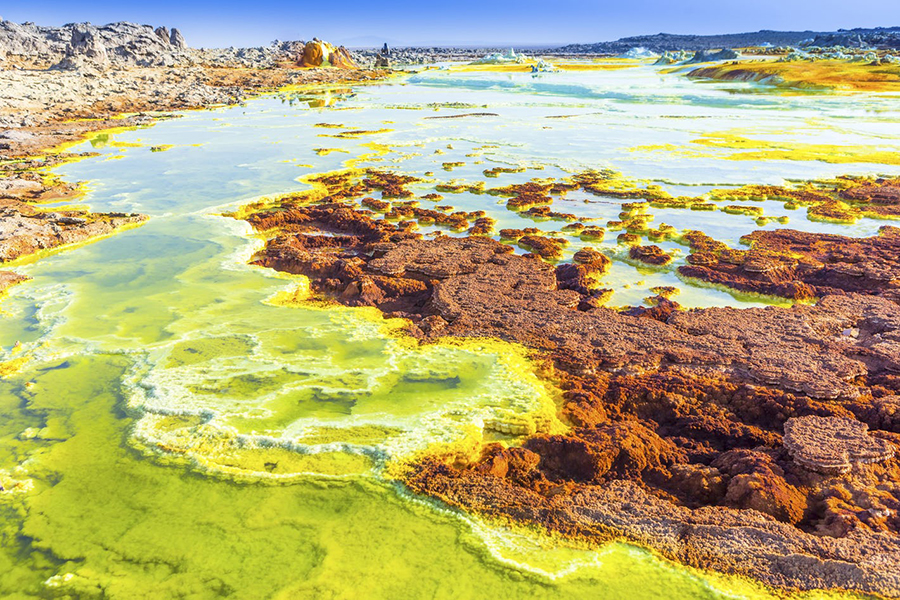 It’s that magic combination of heat and minerals again… the Danakil Depression is one of the hottest places on earth, and its weird moonscape it littered with hot springs. But the tempestuous earth is covered in bright whites, pinks, and yellows, clinging on the rocks like flamboyant, bubbling barnacles. To live there would be hell. To take a few photos, however, is a different story. See www.Ethiopia.travel 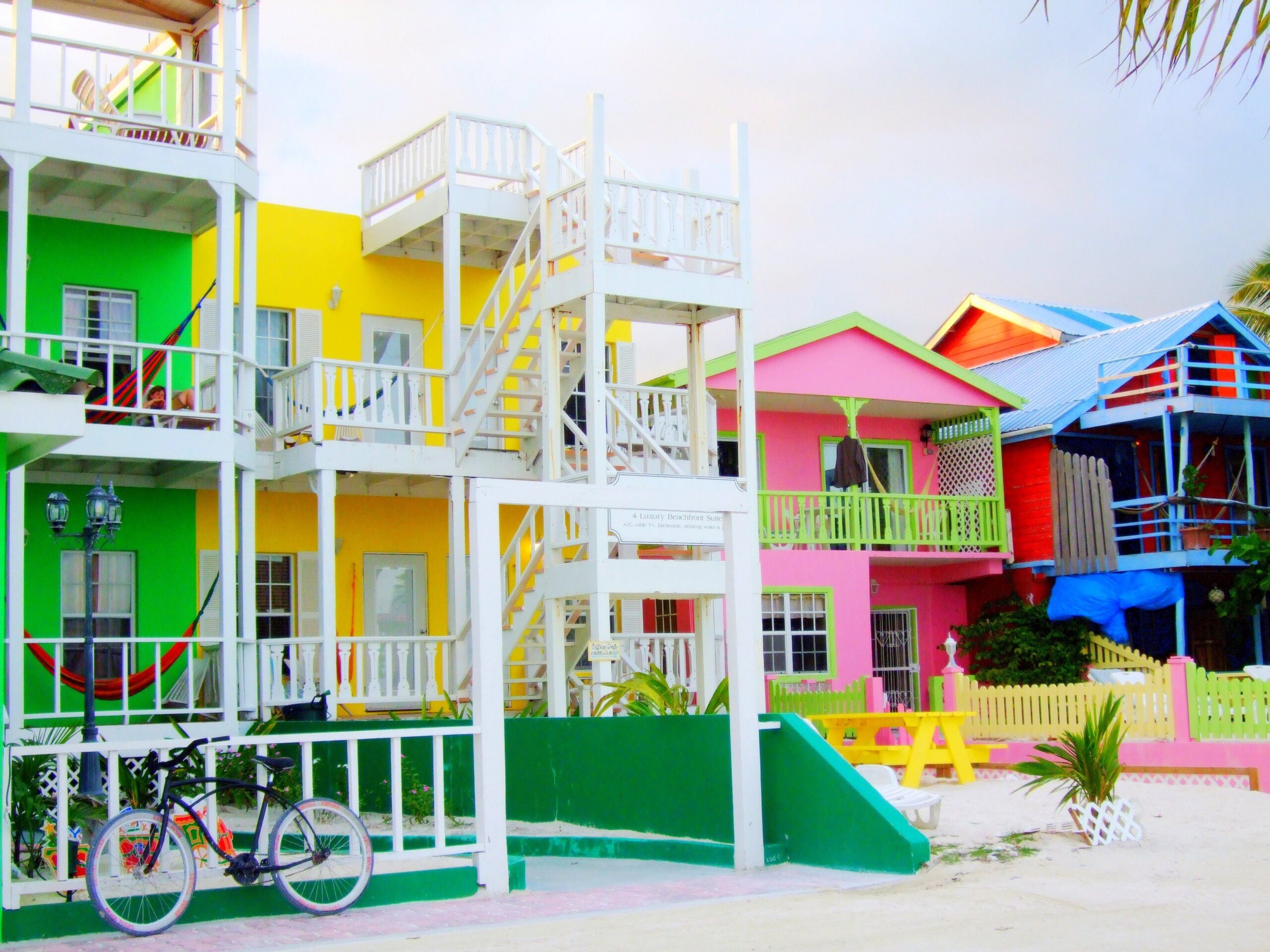 Combining several elements of what make other destinations so colourful, this small limestone island off the coast of Belize has Caribbean spirit in spades. It’s next to a reef, so the underwater coral show is there to explore, and the shallows around the island provide the teals and turquoises. Most importantly, the guesthouses, hostels and bars on land are painted in often outrageously garish hues. Bring your sunglasses. See www.gocayecaulker.com 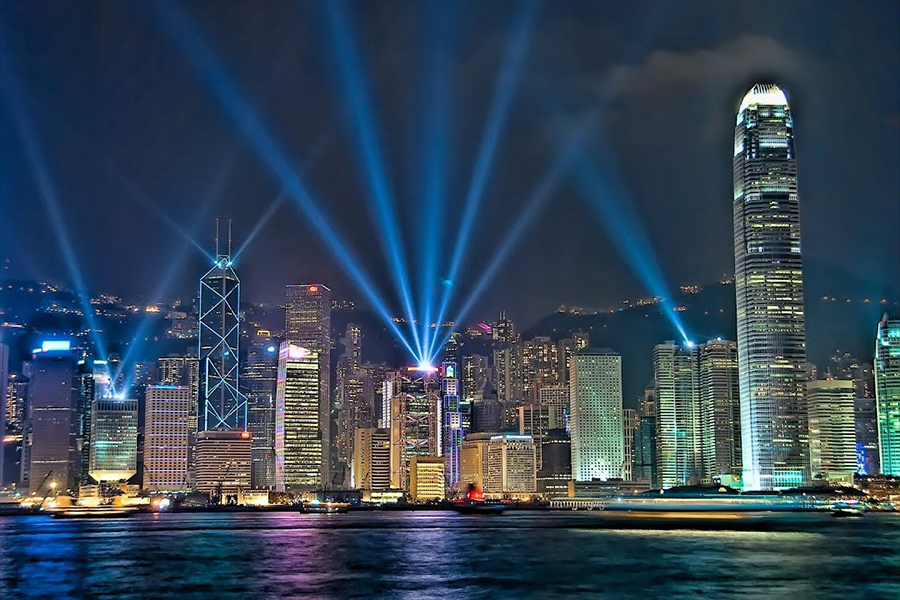 Other cities are brighter and have more organised colour schemes, but Hong Kong makes up for not having a lurid paint job by putting on a light show every evening. At 8 pm, the Symphony of Lights kicks off around the harbour, with the city’s grand skyscrapers changing colour and projecting beams into the night sky. It’s like a giant, daily fireworks display. See www. discoverhongkong.com

Gardens by the Bay, Singapore 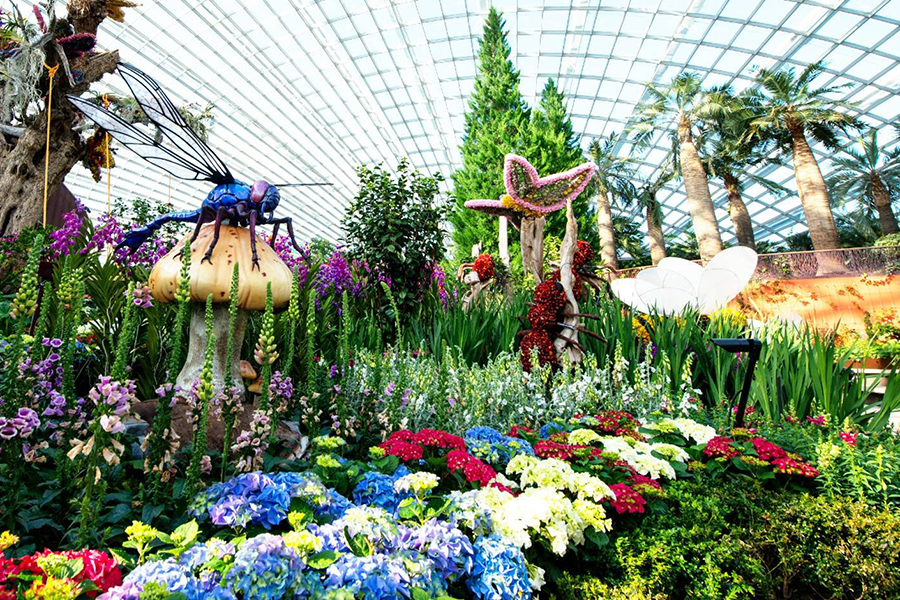 For any garden and plant enthusiast, a stopover in Singapore must include a visit to the Gardens by the Bay. The incredible botanical displays all in the one location allows you to see an enormous selection of plants and flowers. There are amazing water and art displays and you can’t go past an evening visit to the Super Tree, Sky Walk at night.   See www.www.visitsingapore.com/