As we all know things never stay the same. Sometimes things change for the better, and sometimes we progress to a trajectory of advancements only to look back and wonder if we’ve improved for the better at all.  This may be said about the comfort of air travel if we look back at the Golden Age of Aviation.

Nowadays we’re faced with long lines at security checkpoints. We’re lucky to get a small bag of pretzels or a basic meal in economy class while the aircraft themselves are often filled to capacity. Add to that the fees attached to almost every amenity and you quickly realise the realities of 21st-century commercial air travel.

Amazing advancements in aviation made it possible to increase the accessibility of air travel to a wider market and airlines and airports have changed the way they deliver their aviation experience to the traveller.

The 50s, 60s and 70s were the glory years for Australia’s airports and airlines, and as these archive pictures show, air travel certainly looked much more relaxed back in those days.

Passengers looked as if they actually enjoyed the experience, which at the time would have been new to many travellers and a select few. During the 1950s, airlines promoted commercial air travel as glamorous, stewardesses served full meals on real china, airline seats were large (and frequently empty) with ample legroom , and passengers always dressed well.

Food was a significant part of the experience, with airlines serving lavish meals in Economy through to First Class. As the pics below show it was quite the experience! 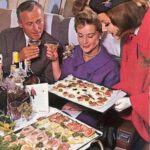 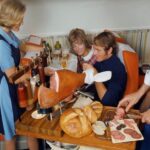 After jets were introduced in the late 50’s, passengers could travel to even the most distant locations at speeds unimaginable a mere decade before. An airline trip from New York to London that could take up to 15 hours in the early 50’s could be made in less than seven hours by the early 1960’s.

But airline nostalgia can be tricky and ‘golden ages’ are seldom as idyllic it seems. Until the introduction of jets in 1958, most commercial planes were propeller-driven aircraft, like the DC-4. Most of these planes were unpressurized, and with a maximum cruising altitude of 10,000 to 12,000 feet, they were unable to fly over bad weather. Delays were frequent, turbulence common, and air sickness bags often needed.

While the later DC-6 and DC-7 were pressurized, they still flew much lower than the soon to appear jets, flying 20,000 feet compared to 30,000 feet, and often encountered turbulence. The piston engines were bulky, complex, and difficult to maintain, which contributed to frequent delays.

The 1970’s were without a doubt a golden age of air travel for the world but also Australia. It was the era that saw the upper decks of Boeing 747’s turn into full-scale cocktail lounges and restaurants for first-class flyers. On the lower deck, there were also coach or economy lounges. Continental Airlines had a pub while American Airlines had an infamous piano bar.

Qantas introduced the ‘Captain Cook Lounge’ onboard its 747. Located behind the cockpit in the distinctive bump of the Jumbo, the lounge had seating for 15 passengers, a stand-up bar, and bright lurid 70’s décor. Images of James Cook, replica lanterns, and even rope were used to give the impression passengers were seated inside a replica sailing ship rather than a brand new wide body jet.

On our shores the ‘kangaroo route’ had been in full swing since 1947. The journey from London to Sydney took an incredible four days, which included four stops for refuelling and two overnight stays on land. By the time passengers arrived in London, they had spent a total of 55 hours in the air and had transited through Tripoli, Cairo, Karachi, Calcutta, Singapore, and Darwin. A return ticket wasn’t cheap, costing more than twice the average wage at the time.

Passengers nowadays struggle with 23 hours of flight time on the same route, it’s hard to imagine the jetlag if you consider the equivalent 70 years ago.

It was a time of growth for Australia’s main airports too, the majority of whom started from small beginnings. Australia’s airports have gone through many phases of modernisation over the years, but these images hark back to a time when it seemed like life went at a more sedate pace.

Sydney airport’s aviation history began when the New Zealand aviator Captain JJ Hammond took off from the airport site on 18 April 1911. Mascot Aerodrome was officially opened in January 1920. In 1921, the Commonwealth acquired the aerodrome as part of a program to develop a nationwide airport network. Additional land was acquired during the 1930s and a new passenger terminal was opened in 1940.

Melbourne Airport was opened in 1970 to replace the nearby Essendon Airport. Essendon still was home to domestic flights for one year, until they were transferred to Melbourne Airport on 26 June 1971, with the first arrival of a Boeing 747 occurring later that year. In the first year of operations, Melbourne handled six international airlines and 155,275 international passengers.

When it was opened Melbourne Airport consisted of three connected terminals: International in the centre, with Ansett to the South and Trans Australia Airlines to the North. Celebrating its 50 year anniversary quietly this year, Melbourne Airport has come a long way along with the rest of Australian airports to accommodate millions of passengers in comfort, style and security pre COVID times.

Thankfully, air travel is now faster, cheaper and more convenient. Technological advancements have allowed planes to fly at higher speeds and for longer periods without refuelling. Today, you can fly the kangaroo route with a single stopover, costing you a fraction of the price it was way back then.

People today may bemoan the crowded airplanes and lack of onboard amenities but the cost of time and safety in today’s world sure outweigh the disadvantages of flying with less fanfare and style.  Remember the smoke-filled cabin? Business Class seats that weren’t fully flatbeds? No entertainment except for the one screen at the front of the cabin if you were lucky?

We sure have come a long way in our flight experience albeit we’re munching on pretzels and plastic-wrapped food, packed in like sardines but then again, now most of us have the opportunity to explore the world whenever the whim takes us.