THE OLDEST RESTAURANT IN (Almost) EVERY COUNTRY

Good food is a cultural treasure that is handed down through generations.

Many of the world’s oldest businesses are restaurants for the simple reason that delicious, familiar food never goes out of fashion.

Everywhere in the world, we eat variations on centuries-old recipes embedded in the place we come from. Restaurant culture tells us who we are, where we’ve been, and where we are today.

Since the COVID-19 outbreak, times have been tough for restaurants. While cities and countries have gone in and out of (and back into) lockdown, restaurants, and cafés have had to close their doors for months at a time, or shake up their business models, delivering food locally or selling groceries from their empty tables instead.

As the world tentatively opens back up, there are some much-loved establishments that sadly haven’t been able to weather the disruption this year’s global crisis has caused and that will never reopen. It’s not all bad news, though, as these colourful maps prove.

These long-running institutions are still serving customers today, and are a reminder that cities and their finest places to eat out have survived much more than everything the first half of 2020 has thrown at them.

These maps – sourced from NetCredit – reveal the oldest eatery you’ll find in nearly every country in the world.

They’ve searched websites, forums, and eating guides to identify the longest-running restaurant businesses that are still serving today. Going one step further, they found out what the restaurant’s signature dish is – to give you a flavour of the national culture.

The infographics, which split the world up into six areas, are a guided tour of the oldest restaurants on the planet.

It’s no picnic keeping a restaurant in business across centuries of war, changing tastes, and economic turmoil. Restaurateurs and the descendants or investors who follow them need the right combo of location, kitchen wizardry, insight, and luck. These are the 10 of the world’s oldest restaurants still serving food today.

A local pirate named William Mayes established today’s oldest restaurant in North America in 1673. The White Horse Tavern in Newport, RI., became a meeting place for the Colony’s General Assembly and Criminal Court. Mayes’ son followed his father into both the piracy business and the hospitality game. Their extended family ran the restaurant for over 200 years.

Montreal’s Auberge Saint-Gabriel was the first tavern on the continent to receive a liquor license, in 1754. “In the middle of Old Montreal sits this massive, extremely old building,” writes one contemporary diner. “Dark, stone walls, fireplace, Cornish hens cooking on a spit.” The hen is the specialty, served with vin jaune and cep sauce and wood fire-grilled vegetables. 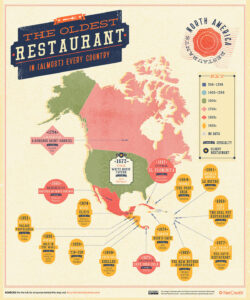 world’s) oldest restaurant. Its first trace is in a poem by Alcuin of York, in 803. It may also be the only restaurant to have served both Wolfgang Amadeus Mozart and Clint Eastwood. The Stifts Kulinarium opened as an inn within St. Peter’s Abbey and today offers ‘upscale’ cuisine amidst a celebration of Austrian tradition.

Sobrino de Botín in Madrid, Spain, claims to be Europe’s longest continuously running restaurant. French cook Jean Botín opened the restaurant in 1725, when restaurants were only permitted to prepare food the guests brought. Botín’s original wood oven is still in use today. The romantic painter Francisco Goya washed dishes here as a teenager. 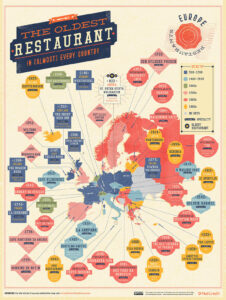 Aşçı Bacaksız has passed along generations of the same Turkish family in Afyonkarahisar since 1840. You can expect to be greeted by a member of the family before sitting in a chair that is 100 years old or more. The lamb kebab is famous in the region: it takes three days to prepare.

Edmond Barakat opened a staff cafeteria for an automobile company in 1953, and it soon became a popular destination for the general public. The restaurant’s name changed from “Alghanim Mess” (as in ‘mess hall’) to Mais Alghanim in 1987. Today, Barakat’s children and grandchildren run Mais Alghanim as Kuwait’s oldest restaurant. The umm ali (sweet pastry) comes highly recommended. 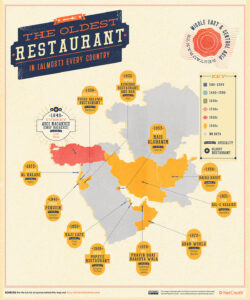 La Puerta Falsa is situated in an old colonial house in Bogota. Just 20 diners can fit in the bar area and discreet wooden mezzanine. Colombia’s longest-serving restaurant opened in 1816 as a hole-in-the-wall to serve street food – such as its famous tamales – to passers-by.

Argentina’s oldest is El Imparcial in Buenos Aires. It was named “The Impartial” in the hope that nobody would spoil the atmosphere with talk about politics or religion. El Imparcial opened in 1860, with signs promising “Boiled chicken stew with carlón wine.” The restaurant thrives as a reliable local eating place, with paella that always satisfies. 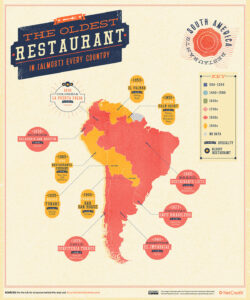 The oldest restaurant we could identify in Africa is Tunisia’s El M’Rabet. Ali Thabit – a minister for the bey of Tunis – founded it as part of Zaytouna Mosque around 1630. El M’Rabet boasts ‘sublime’ views of the bustling, historic Jemâa Ezzitouna marketplace.

A British colonist, Thomas Hartley, opened the Bathurst Inn in South Africa in 1832. The Bathurst flourished thanks to the hospitality of Hartley’s wife, Sarah, who took charge after her husband’s death. A Royal Air Force unit homesick for their local UK pub later renamed it Pig & Whistle Inn. Today’s menu of pies and roasts is inspired by traditional British pub food. 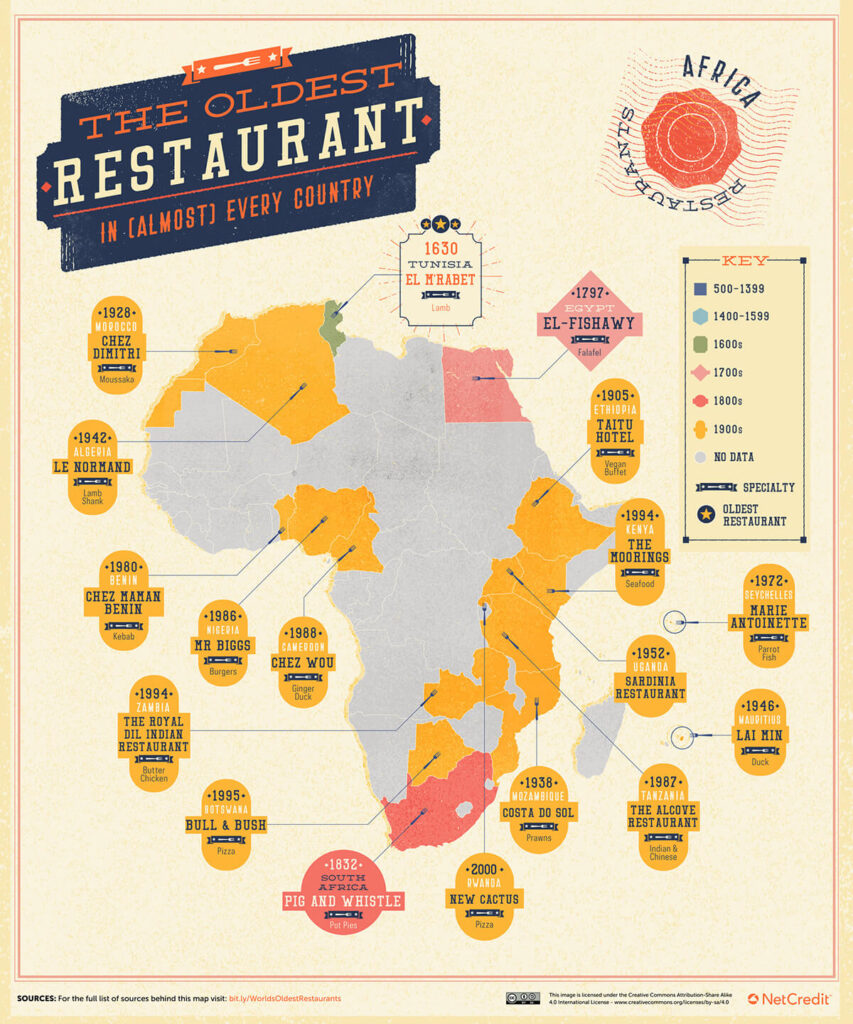 Honke Owariya opened as a confectionary shop in Kyoto, Japan, in 1465, and branched out into soba noodles from around 1700. Previously, only Zen monks produced noodles, but Owariya stepped in when the temples couldn’t keep up with demand. The restaurant was later designated “purveyor of soba noodles to the Imperial Palace.” 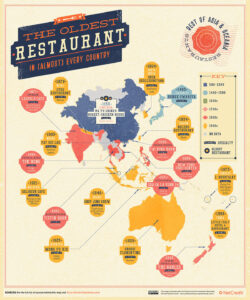 Everybody knows that the best food in the world is “Mama’s cooking.” But these long-standing restaurants show that we are the sum of generations of mamas and papas in the kitchens of the world’s meeting places. Familiar yet special, the food served by the oldest restaurants on Earth is nothing less than a map of our cultural past.