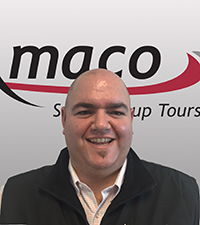 Some of Mathew’s earliest memories are travel related. Whether it be flying as an Unaccompanied Minor at the age of 7 or going on a school camp to the Kruger National Park a year or two later – it is safe to say that that he was well and truly bitten by the travel bug from an early age.

While still completing his university education Mathew was already arranging and leading large groups of students overseas. Upon graduating with degrees in Business Management, Psychology and Sociology, Mathew worked in IT Sales and Business Development for a number of years before finding the lure of travel too strong to ignore.

Starting out as a Junior Travel Consultant, he progressed quickly and soon after began work as an Account Manager with Impact Organisation – one of the leading independent B2B Conference and Incentive companies in Australia at the time.

His ability to exceed the demands and expectation of some of the most prominent companies and associations in Australia saw him promoted to Senior Account Manager. He excelled and flourished in this position – organising a number of highly regarded Pharmaceutical, Medical and Corporate events each year both in Australia and internationally.

In 2010, Mathew played a central role in establishing the joint venture between Impact and Amaco Travel. Once completed, he assumed managerial responsibility for all the Amaco Conferences while still servicing his existing Corporate and Association clientele.

In July 2015, Mathew purchased the Amaco business and set about increasing the scope and appeal of the conferences offered. Since then, Amaco has gone from running 1 or 2 conferences a year to running 4 or 5 conferences. The conferences are regarded by some as the leading offshore educational events for healthcare professionals.

When not traveling the globe, Mathew is a family man who spends as much time as possible with his wife and two daughters.

Back to Amaco Team